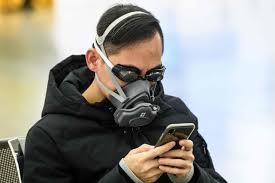 Unless living in a cave, you must have heard about Coronavirus, wether itw as in a journalistic news, in a joke, or maybe in some questions you saw online. The world is fuzzing, looking like the beginning of The Walking Dead. Of course, it is an important matter of health, we might wonder if we’re all gonna die at any moment. What a suspens regarding the future of mankind.

Like you, I have seen a lot of things on social networks. I laughed at the « meme » from singer Corona telling us that we were watching The Rythme of the Night. I snigged when I saw the picture of a man preparing himself by cutting limes, a reference to the    same-name beer. I was less enthusiast when I read a news denouncing the racism which asian living in France were victims of. I didn’t laugh when some of my hypocondriac patients told me that they wouldn’t get out of their place. Whatever the content or the intention, we are witnessing a fascinating phenomenom (so fascinating that it seems that Australian bushfires suddenly extinguished) called in psychology the collective hysteria, which it seems social networks are promoting. What exactly is collective hysteria ? Do social networks have a real influence on it ?

What about collective hysteria ?

Hysteria comes from hustera, a greek word meaning the matrix or the uterus. That’s why women are often described as hysteric, while actually men and women are equally affected. In psychoanalysis, in our structural approach, we consider it as a neurosis divisible in anxiety hysteria (hystero-phobic for psychoanalysis purists) or conversion hysteria. The person suffering from that not-necessarily pathological structure will see disconfort in its environment. The patient is into dramatization, in opposition to obsessionnal neurosis which are more likely to seek control. Unlike dementia, hysteria is an operating mode which allows to keep psychic materiel in a basal and functionning state. 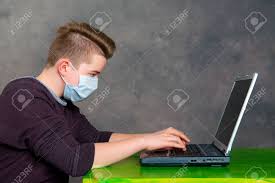 Hysteria has this saving side that ensures a kind of psychical integrity when processes are hold correctly. A hysteric person needs crisis, he gets upset, he complains, he shows that something is wrong, and that helps him to feel better. When the environnemental burden gets too big, it gets « problemapathological ». Yes, that word doesn’t exist, but it summarizes the situation. Deeper anguishes will appear, maybe some phobia. Or maybe, in a more dramatic way, will the body expose the psychical disease. It could even get really sick. How can we ignore, in today’s actuality, that we could see symptoms as described in the media, inclusing social networks ? Those will feed phobias, leading sometimes to symptoms and higher anguishes. Still following ?

In the collective hysteria field, we are witnessing a mass phenomenom in which persons from a same group will developp an inacurate and scary representation of a situation they share.

In the last few days, on social networks, we can read lot of information regarding that dangerous virus that lead a whole population to containment. That looks like the first episode of a zombie TV show. We have to contain the Other, to flee him, otherwise we are all doomedto die in excrucriating pain. The virus didn’t need more to spread… maybe more online than in real life. And from that viral spread was born the collective fear and the symptoms, and so the two possible nevrotic declinations we spoke of above. Let’s be honest : a runny nose or an itchy throat this winter are just flu symptoms as we have seen in the last years. But there is something else that our subconscient wants to warn you about. It is not the first time it happens, but we tend to forget about it. The problem of that kind of collective hallucination it that it confronts the mass opinion, and the mass is always right, so people tend to reject any information contradicting the mass.

That being said, if we can develop a free will, Others will appear irrationnal to us, making it more difficult to convince them. We could imagine how today’s internet affects the hysterisation of those sanitarian phenomenoms. Information comes from the whole world, and so from the source. They have to be reliable because « someone knows someone who saw a post from one of his contact telling that… », and governments and press can’t lie anymore, the information available on Facebook comes from people living the actuality. All of that available information lead to a confirmation bias. There is so much to read, but we’ll only remember the headlines. Everything, even the humor that should help to appease our fears, well eventually confirm that the situation is catastrophic, and that this is the truth.

The, everyone will start giving advice, sharing some news, opinions, etc. In our primary instinct of surviving, we’ll tend to believe everything we read and share. That’ll feed the fear, the hysteria, and that big gear that spread through the blogosphere. Suddenly, it seems we all become experts, am I not being one while writing those lines ? 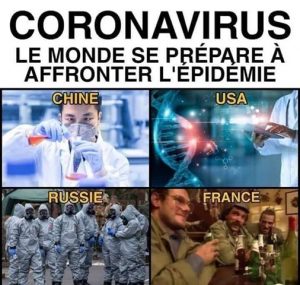 That is collective hysteria, and that’s how we help that phenomenom through our publications, sharings, jokes and advices we give online, wthout even applying them to ourselves. That raises a more general question regarding that kind of phenomenom and the network which is meant to give us information but keeps feeding us with fake news and fake believes.

Why do web accentuate that phenomenon ?

For hysteria to take place, collective believe has to be fed, that’s where social networks play a big role. I recently did a test on my Facebook profile, writting « Macron is right, the pension reform has to pass ». I left the message for about two hours, no one came to me to discuss this but I lost 10 « friends » and I got some insults in private messages. What a foolish idea ! We can’t publicly speak a thought other than the one the group autorizes. It is like a validation process of the absolute way to think. Groups on social networks are created from those affinities. Just like in real life, we reject what causes trouble. But in a public space, it is more difficult to tell our contacts that we think otherwise. Of course, everyone can think whatever ha wants of Macron’s politics, but what matters here is the impact of social networks on what we can tell online if it our thoughts are different from the common thought. 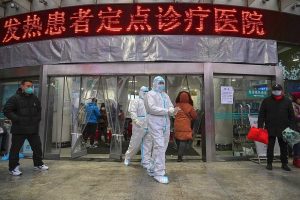 Another thing that explains the importance of social networks in collective hysteria is the speed the information spreads and the coverage those networks cover. Before, it was possible to canalise the information flux to mitigate its consequences. If we consider collective hysteria as a possibility for people to take measures that could eventually put them in danger, that canalization was important, yet questionable. With internet, that canalization seems no longer possible : the world knows everything, quickly, no matter the precautions that should have been taken and the danger it might represent. It could be safer if the information was right and checked, but it is not always the case.

Should we end collective hysteria ?

Precaution is important, it suggests that you stay alert. I don’t now what the Coronavirus is, I don’t know if what I read online is true or not. I am not a biologist, I don’t run the WHS, I am not qualified to tell you if we should be worried or not. Just like you, I am a surfer who enjoys the possibility to stay informed of what happens in the world in a sanitarian perspective. Just like you, I try, as a thinking being, to take some distance from what is spread on social networks. Telling what is true or not is difficult, but it is my role to try not being a contaminant feeding the symptoms of that collective hysteria. Maybe that is the definition of prevention regarding internet.